Crescent City, Calif. – The Battery Point Lighthouse in Crescent City was first lit with oil lamps in 1856. It’s survived hundreds of storms and even two tsunamis.

Today, visitors are welcome, but there’s a catch.

The catch is you can only get to the Battery Point Lighthouse during low tide.

And then it still can be a challenging 200-foot walk from mainland to island as sneaker waves slap at your ankles.

But once you’re there, you’ll discover over 160 years of nautical history. Oh, and beware of the ghosts!

Ever since 1856, there’s been a lighthouse keeper or curator living in this lighthouse every day.

Steve Cohen is one of the lighthouse keepers at Battery Point. He said, “It’s pretty much a fulltime job.”

He leads tours of this pre-Civil War maritime monument.

In 1856, the lighthouse keeper was pretty isolated out here.

They had duties including cranking up a 200 pound weight every eight hours to the top of the light tower in order to run the gears that ran the Fresnel lens.

It’s important to note that the battery point lighthouse is an operating lighthouse still.
And the light is always on.

Oh, and about those ghosts. “We actually have three ghosts in the lighthouse,” explained Cohen. “We had a paranormal researcher come out sometime back and they identified two ‘adults’ and one ‘child.’ We have a rocking chair in one of the bedrooms upstairs that several lighthouse keepers have reported rocks back and forth during the middle of the night with no one sitting in it.”

We really wanted to capture a lighthouse ghost on video, but there are no cameras allowed inside.

So when you visit, let us know if you see one. For more on the battery point lighthouse and how to get there, visit http://www.delnortehistory.org/lighthouse. 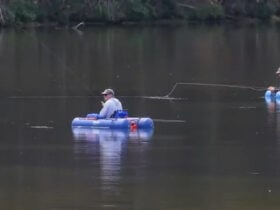