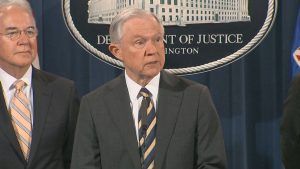 Those charged include 115 doctors and other health care providers.

The opioid epidemic was a major focus of the arrests and charges.

Many defendants were charged in connection with prescribing and distributing dangerous narcotics.

During a press conference, A.G. Sessions said, “Among those defendants announced today, 120 have been charged with opioid-related crimes, making this also the largest opioid-related fraud takedown in American history.”

Sessions cited the CDC’s reporting that the opioid epidemic kills more than 90 people every day.

He remarked, “One fake rehab facility for drug addicts in Palm Beach is alleged to have recruited addicts with gift cards, visits to strip clubs, and even drugs-enabling the company to bill for over $58 million in false treatments and tests.”

Sessions added the DOJ will continue to work to prosecute wrongdoers.