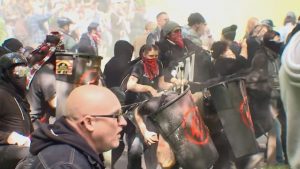 Hundreds of them gathered in downtown Sunday, to counter a “Trump free speech” rally across the street.

But police say the counter-protesters started throwing bottles and bricks at one point.

That’s when officers used pepper spray and closed down the park where the anti-Trump rally was held.

Police say 14 people People were arrested Sunday – most of them in the anti-Trump crowd.

Tensions in Portland have been high since a deadly train stabbing blamed on a suspect who went on a hate speech tirade before the attack.