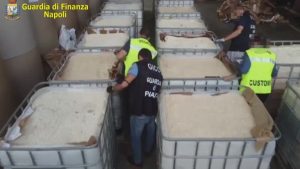 Police discovered three shipping containers crammed with around 85 million pills in the southern port of Salerno. They said the street value is about $1.6 billion.

It took electric saws to cut through six-foot-tall cylinders to remove pills in the hollow centers.

Police say ISIS produced the pills in Syria to fund extremist activities and that they were headed for the European illegal drug market.

Investigators theorize that amphetamine production in Europe was hampered by the pandemic lockdown so drug traffickers might have turned to Syria-based producers to meet demand.