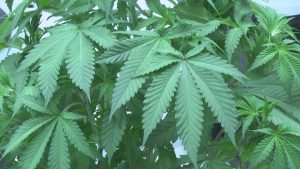 KLAMATH COUNTY, Ore. – An illegal marijuana grow was busted outside of Keno Wednesday.

The Klamath County Sheriff’s Office said they served a search warrant at a residence in the 17000 block of Hamaker Lane on August 22. Deputies found 176 marijuana plants growing in a greenhouse and inside the residence.

According to deputies, the household was only allowed to grow four plants.

Four of the plants were left untouched by investigators, but the other 172 plants—totaling 660 pounds—were seized.

One person, 38-year-old James Young, was cited to appear in court and two others are under investigation.

“Despite the sustained outcry by those opposed to any controls on the production of marijuana in Klamath County, if it is being produced in illegal quantities the KCSO will continue efforts to enforce these laws,” the sheriff’s office said. “The position of the Sheriff on the issue of illegal production of marijuana in Klamath County is pretty clear, ‘Grow legal or get out.’”