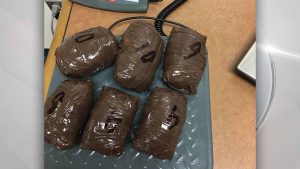 GOLD HILL, Ore. – A traffic stop led to the discovery of over two pounds of heroin hidden inside a vehicle.

Oregon State Police said on the afternoon of July 15, a trooper pulled over a 2005 Nissan Altima for failure to display a license plate.

During the traffic stop just outside of Gold Hill, the trooper asked to search the vehicle and he was reportedly granted permission by the driver.

According to OSP, the trooper found approximately 2.7 pounds of heroin concealed inside the car.

The driver, identified as 23-year-old Eric Barrios of Long Beach, California, was charged with unlawful delivery of heroin and unlawful possession of heroin.