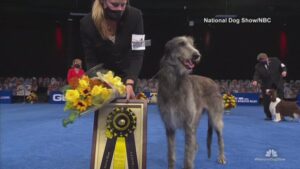 PHILADELPHIA, Penn. (NBC) – A new top dog has been crowned. The Scottish Deerhound has won Best in Show at the 2020 National Dog Show Thursday night.

Claire the Scottish Deerhound beat out hundreds of dogs representing 168 breeds and varieties recognized by the American Kennel Club.

She first beat 28 other competitors in the hound group. Claire then competed against the other six group winners before taking home the top honor.

The English Springer Spaniel was named Reserve Best in Show.

Two breeds made their National Dog Show debut this year. The Barbet, a French water dog, joined the sporting group, and the Dogo Argentino, which falls under the working group.