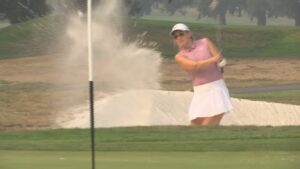 The women’s championship was between Payton Canon and Johnna Nealy.

“Even if you have a bad hole,” said Johnna Nealy, champion of the SOGC’s women flight. “Like I doubled the first hole, but I was only one down. So, I said  ‘Alright, I have a lot of holes left. I have seventeen holes left. Let’s get this going.”

Playing right behind the women’s match, was the men’s championship.

This one was between R.O. Gamez and Chris Polski.

By the 9th hole, Polski was cruising and leading by 6.

But Gamez came back fighting and was soon able to tie things up.

Polski said the smoky conditions were getting to him.

“It definitely affected it,” said Chris Polski, champion of the SOGC’s women flight. “I could feel it in the lungs. I can definitely feel it. I was getting a little more winded than usual.”

Polski won the championship on the 34th hole.

These are the rest of the winners of the 2021 SOGC:

This marks his 12th championship victory.

The junior-senior championship was won by Micheal Stieler.

Clark Glen won the super senior, and legends were won by Den Clark.