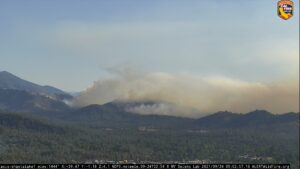 On Wednesday morning, employees working at a remote rock quarry near Fawndale Road north of Mountain Gate saw a woman trespassing on the property and acting irrationally, CAL FIRE said.

Later that afternoon, CAL FIRE and other agencies responded to a vegetation fire in the area the woman was seen. That fire later became the Fawn Fire which prompted mandatory evacuation orders for residents in the area.

At about 8:00 p.m. that night, a woman walked out of the brush near the fireline and told firefighters she was dehydrated and needed medical help. She was later identified as 30-year-old Alexandra Souverneva of Palo Alto, California.

After getting Souverneva away from the flames, investigators came to believe she was responsible for starting the fire. She was subsequently arrested and booked in the Shasta County Jail. CAL FIRE is requesting she be formally charged with “arson to wildland.”

Over 9,000 structures remain threatened by the fire. It’s estimated 25 have been destroyed.

Nearly 1,000 people are working to control the fire.

For the latest updates, visit https://www.facebook.com/ShastaTrinityNF/