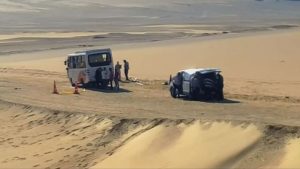 Cairo, Egypt (NBC News) – Gunmen attacked a group of Coptic Christians traveling to a monastery in southern Egypt Friday, killing 28 people and wounding 24–with many children among the victims.

Eyewitnesses said masked men opened fire after stopping the Christians, who were in a bus and other vehicles.

The attack took place on a road leading to the monastery.

Security forces launched a hunt for the attackers, and set up dozens of checkpoints and patrols on the desert road.

The attack followed a series of church bombings claimed by ISIS in a campaign of violence against the Copts.

Egypt’s president al-Sisi said “the whole world needs to unite in face of this evil” reacting to the attack.

He said his country had struck bases in which militants who waged the deadly attack were trained, but gave no details.

Al-Sisi also called for President Donald Trump to take the lead in the fight against global terror.

There was no immediate claim of responsibility for the attack, which came on the eve of the holy month of Ramadan.