MEDFORD, Ore. — A fire in Medford closed down Biddle Road late this afternoon, and tonight firefighters are still mopping up the area.

“I was on the other side of the creek next to a cherry tree, and there were maybe 3 or 4 people yelling, fighting talking about lighting the place on fire and maybe 5 minutes later I could smell smoke,” said Matthew Cartmill, a witness to the possible start of Sunday’s fire. He says he believes the fire was human-caused.

He says there was also a small explosion.

“It sounded like smaller propane tanks, the area seemed to be an old camping area with lots of debris and garbage,” he said.

The fire quickly grew, burning on both sides of Bear Creek.

Biddle Road by the airport was quickly shut down by first responders. 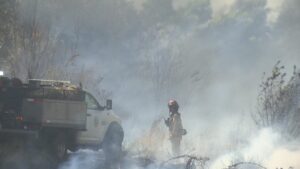 “We have Rogue Valley strike teams from Jackson and Josephine County coming to support the firefighting efforts, but also to help us cover the stations and other calls in the City of Medford,” said City of Medford Fire Chief Eric Thompson. He says there is some damage to trailers at Medford business Camping World.

The old Crater Meat Packing Building also had fires in its attic.

“I’ve had some spot fires as a result of the fire, we do have the fire contained right now – we are worried about the embers and we do have several debris piles within in the burn area,” said Chief Thompson.

“The humidity dropped and our number one priority is to watch for spot fires,” he said.

Firefighters got a handle on the situation early in the evening, but Thompson says they’ll be diligent.

“Since it is an urban setting in town, we’re going to make very sure we don’t any additional embers and spot fires so we’re going to be very vigilant in those attempts to keep it suppressed,” Chief Thompson said.

Chief Thompson says there are no known civilian or firefighter injuries at this time.