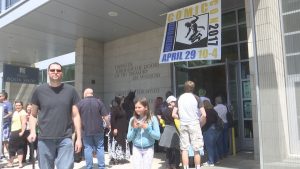 Medford, Ore., — People from all over the region came to Medford today for the biggest Comic Con event yet.
But the event at the Medford Library was extra special for one local couple.
Thousands of people from around the Rogue Valley turned into their favorite characters, and lived their fantasy life for a day at Comic Con.
“I like the Lord of the Rings. Yeah J.R. Tolken he’s great. Wizards!”
Anywhere from Batman, to Mad Max characters, everyone in attendance was dressed up from head to toe.
“I’ve been a big fan of RPG since I was a little kid. I got this game on launch and I fell in love with it. Everything about it from its story telling to just it’s rich environment.”
Hundreds of vendors took over the Medford Library, 9th street, and even some of the Rogue Community College campus.
It’s something those in attendance were excited by.
“Walking around and seeing such a wonderful community of people, it took months to put this together.”
Some die hard fans took even their comic con experience to the next level.
Leslie and Timothy Edwards decided to get married at the event.
“We’re getting married today and we just thought hey there needs to be a place for the officiant to go, and lets just see if they can do it at Comic Con. And they were so helpful, they jumped on it.”
While the pair is having a full, white gown, traditional wedding next year, the two say it just seemed meant to be to get married on this date.
“Originally it was going to be this year, but my dad got deployed to the army, but we decided we didn’t want to wait anymore, and miraculously my dad came home early.”
Friends and family came in to town for the event, even taking part in the dress up as well.
“Uh idk! He’s nervous. Either this or traditional, I’ll probably feel the same.”
Regardless if you were there for fun, or a lifelong commitment, it was definitely an event everyone could enjoy.