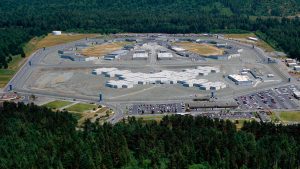 UPDATE (11:57 p.m.): Jail staff say all the inmates shot are in stable condition.

According to the California Department of Corrections, at 10:25 Wednesday morning a fistfight broke out between two inmates in a maximum-security general population yard.

Responding staff tried to get the inmates to stop fighting using “chemical agents” and batons, but they continued.

As the incident was unfolding, a large group of inmates ran toward the fight.

California DOC said the officers were attacked by the group of inmates, prompting officers from three armed posts to use lethal force.

A total of 19 .223-caliber rounds from a Ruger Mini-14 rifle were fired along with three 40-millimieter direct impact rounds.

Eight staff members were injured. Six of them were treated at an outside hospital but two are still undergoing treatment.

DOC said their injuries are “significant but not life-threatening.”

Seven inmates were also hospitalized, five of them for gunshot wounds.

Two inmate-made weapons were recovered, but it does not appear they were used in the attack.