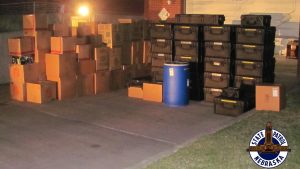 On April 18, a Mercedez-Benz Sprinter van was seen driving on the shoulder of a highway in Fillmore County, Nebraska.

An NSP trooper pulled the vehicle over near Geneva. A K9 then alerted to the possible presence of illicit substances inside the van.

When the van was searched, troopers said they found 1,853 pounds of marijuana, 8,779 doses of hash oil vape pans and 46 pounds of loose hash wax. NSP estimates the street value of the drugs to be over $5 million.

The driver, identified as 39-year-old Colorado resident Michael Cardis, was arrested on multiple charges including possession of marijuana with the intent to deliver. He was lodged in the Fillmore County Jail.