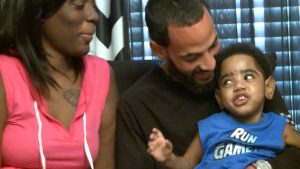 GWINNET COUNTY, Ga. (WXIA) – A 2-year-old boy has been denied a life-saving kidney transplant from his father, a 100% match, because of red tape between the hospital and police.

Anthony Dickerson’s son, A.J., was born without kidneys. Fortunately, Dickerson is a perfect match and was scheduled to donate his left kidney to A.J. However, the procedure was put on hold because Dickerson violated his probation last month. Dickerson was arrested for possession of a firearm.

Dickerson said initially the hospital was complying with his arrest, allowing him to be escorted to Emory Hospital for preoperative appointments. But after he was released from jail, the hospital’s tone changed.

Emory Hospital sent a letter to the Gwinnett County Jail stating: “The Living Donor Transplant Team at Emory as asked Mr. Dickerson for evidence of compliance from his parole officer for the next three months. We will re-evaluate Mr. Dickerson in January 2018 after receipt of his completed documentation.”

The family says a probation violation shouldn’t stop the process — especially if Dickerson is healthy and clean.

Emory Hospital released a statement saying: “Emory Healthcare is committed to the highest quality of care for its patients. Guidelines for organ transplantation are designed to maximize the chance of success for organ recipients and minimize risk for living donors. Transplant decisions regarding donors are made based on many medical, social, and psychological factors. Because of privacy regulations and respect for patient confidentiality, we cannot share specific information about our patients.”

A.J. suffered a stroke two months ago, and needs constant care. He needs many doctor’s visits, and now he’s being told to wait — even though his perfect match sits beside him.