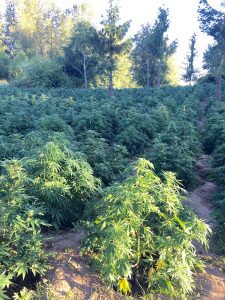 Dayton, Ore. – A large scale marijuana grow site consisting of 6,500 plants worth over $9 million was located in wetlands near the Willamette River.

According to the Yamhill County Sheriff’s Office, the marijuana grow near Dayton, Oregon was determined to be a part of a Mexican drug trafficking organization.

Police said they found 42-year-old Manuel Madrigal, who has a history of previous drug arrests, inside the grow site. He was arrested for federal drug trafficking charges and transferred to U.S. Marshal custody in Portland.

Deputies said Madrigal was living in an elaborate living area complete with a kitchen, which was hidden under a tarp.

Sheriff Svenson with the Yamhill County Interagency Narcotics Team said even though marijuana is legal in small quantities, there is still profit to be made in marijuana by illegal organizations.