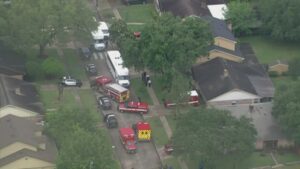 HOUSTON, Texas – Texas police serving a warrant on a kidnapping case were thrown for a loop when they stumbled into a possible human smuggling operation.

Police say they found around 90 people crammed inside a home in a Houston neighborhood.

The city’s assistant police chief said the group was all men except for five.

After the discovery, they were left in the home because some were showing possible COVID symptoms.

Officials say they are working on giving them rapid COVID tests.

Authorities brought them food and water because they hadn’t eaten in a while.

Homeland Security investigators are now taking over the case.

No word yet on who owns the home or who brought the group there.