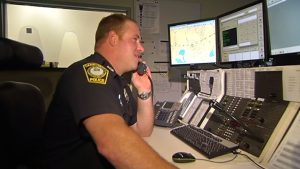 Cape Cod, Mass. (NECN) — A smartphone error is being blamed for a bizarre 911 call to police in Massachusetts.

A driver called police on Cape Cod to alert them about a car crash. But she made one mistake — she made the call from England.
The caller was attempting to reach authorities in Barnstaple, a town in England’s South West region. Instead, she reached the police department in Barnstable, Massachusetts.

The caller was trying to report a hit and run, but dispatcher Mark McWilliams had no idea where she was talking about.

“Where did this happen,” as McWilliams asked the woman to repeat towns he’s not familiar with.

It took about two minutes before both had realized what had happened.

“There’s no way you can help me then, is there,” the woman asks.

“It’s a different town,” McWilliams says. “It’s twinned with Barnstaple, England. But our response time is gonna be about six hours.”