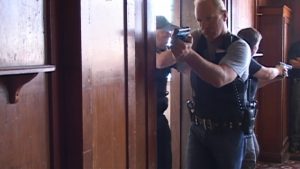 Medford, Ore. — Medford police are now better prepared to deal with an active shooter situation. The department completed their annual training Tuesday at the old Elks Lodge in downtown Medford.

Police say while active shooter situations are rare, it’s imperative that their training is fresh.

“We’re putting ourselves at risk more so than we do in any other case because we don’t have the luxury of waiting for additional officers or additional resources,” Sergeant Don Lane of the Medford Police Department says, “our mission is to get inside wherever the active shooter is at and stop that threat.”

Officers also practiced searching a building for a suspect. Another round of training will take place Friday.