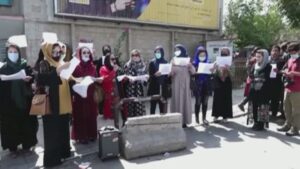 KABUL, Afghanistan (NBC) – Afghan women staged a protest calling for their rights near the presidential palace in Kabul Friday amid the expectation that a new Afghan government would be announced soon.

The group held up signs and chanted, “We afghan women are all together.” They also marched.

Taliban sources told NBC News that co-founder Mullah Baradar will lead a new Afghan government set to be announced as early as Monday.

The Taliban enforced a radical form of Sharia, or Islamic law, in particular oppressing women, when it ruled in 1996-2001.

This time around, the movement has tried to present a more conciliatory face to the world, promising to protect human rights and refrain from reprisals against old enemies.

The United States, European Union and others have cast doubt on such assurances and many Afghans, especially women and those with education or links to the former government or Western coalition forces, now fear for their lives.

In the meantime, fighting between the Taliban and an outfit of armed fighters allied against them continued in the Panjshir Valley north of Kabul the frontline between the two groups.

The Panjshir Valley is the last region not under Taliban control, following the group’s blitz across Afghanistan.

A spokesman for the anti-Taliban movement says its fighters had so far held off an offensive by the Taliban.

A senior Taliban official said the group’s efforts to find a political solution to a dispute with militias there have produced no results.