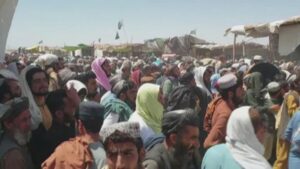 CHAMAN, Pakistan (NBC) – As the Taliban tightens its grip on Afghanistan, hundreds of Afghans crowded the border to cross into Pakistan after it reopened Friday.

Pakistani security forces tried to contain Afghans as they crossed the commercially vital border after it had been closed for a week.

The Taliban captured the crossing last month as part of a major advance across Afghanistan as U.S.-led foreign forces withdraw.

They announced its closure august sixth in protest at a Pakistani decision to end visa-free travel for Afghans.

The hardline Islamist Taliban are demanding Pakistan allow Afghans to cross the frontier with either an Afghan I.D. card or a Pakistani-issued refugee registration card.

Hundreds of Afghans, most of who had come to Pakistan for treatment, had waited in the heat to enter Afghanistan via the crossing for several days.

Border officials had to use their batons at one point as Afghans charged towards the barrier.

The crossing is landlocked and Afghanistan’s second busiest entry point and main commercial artery to the Pakistani seacoast.

Taliban fighters have rapidly taken territory from the Kabul government in recent weeks, including important border crossings with Iran and central Asian countries that now provide significant customs revenue for the group.