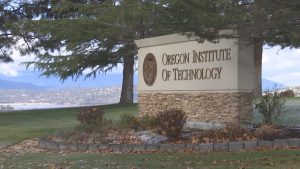 KLAMATH FALLS, Ore.  — After 16 months of negotiations, the faculty union at Oregon Tech has voted to strike. Oregon Tech said it believes it’s making progress toward an agreement, adding more negotiation sessions have been scheduled.

OIT said if the union were to strike, the University would plan to continue providing students with the opportunity to continue their studies and complete their degree as scheduled.

The University said its fiscal health has being continually challenged by the uncertainties of the pandemic. OT-AAUP, the faculty union,  is proposing a 20% salary increase in the first year and additional incremental increases in the next two years. Oregon Tech said it currently pays full time nine-month professors on average 11% more than comparable institutions—$135,000 a year, with health insurance and retirement benefits are included.

Faculty said they will go on strike on April 26. It voted to authorize a strike if the current merit pay system isn’t changed.

In March, they also called for the University’s president Nagi Naganathan to resign. The board met on Thursday to discuss the future of the president, but decided to reconvene on April 20th.