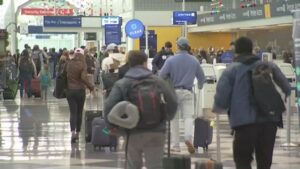 WASHINGTON, D.C. (NBC) – This week, air travel in the U.S. reached its highest point since March.

Overall, air travel remains lower than in years past.

According to the TSA, close to 2 million people crossed airport checkpoints on December 23rd last year.

In recent weeks, the CDC has encouraged Americans to reconsider traveling for the holidays due to the ongoing pandemic.