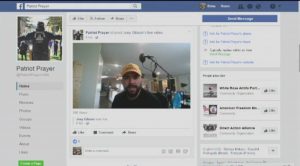 Portland, Ore. (KATU/CNN Newsource) – “Mayor Wheeler will not convince me to cancel the rally. I will not do that”

The ACLU of Oregon tweeted, “The government cannot revoke or deny a permit based on the viewpoint of the demonstrators. Period.”

Zoey Zemanek said, “I understand wanting people to be safe and I know that times are tense right now but I do think that everyone has a right to express her opinion”

Portland resident Kevin O’donnell said, “It’s a tough line to walk but I can’t help to agree with it.”

“You might find a speech to be hateful but the government isn’t empowered to shut speech down because it believes it to be hateful.”

Friday’s incident on the MAX is also fresh in the minds of the local Muslim community.

Harris Zafar told KATU he worries about what kind of message a protest like this could send.

“There is the freedom of speech, the freedom of assembly, yet we know through experience what some of these assemblies are leading to and they’re not productive in nature.”