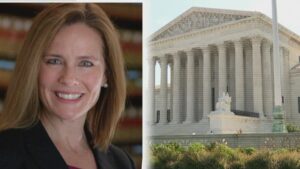 WASHINGTON, D.C. – Hours of heated debate by Republicans and Senators ended with the confirmation of a new Supreme Court justice.

Thanks to Republicans who pressed fast forward on the process to happen before Election Day, Judge Barrett is becoming Justice Barrett with a full week to spare.

The debate on the Senate floor was long and fiery, but throughout the day, there was no doubt that Judge Amy Coney Barrett would be confirmed to the Supreme Court in a nearly party-line vote.

Republicans rushed the confirmation to seat Barrett ahead of a critical challenge to Obamacare.

She helped cement a conservative majority on the court for years to come and play a key role in rulings ranging from abortion, and gun laws to LGBTQ rights.

President Trump was in Pennsylvania during the confirmation, hoping his nominee will boost his campaign.

Amy Coney Barrett has taken her place on the Supreme Court and in history.

If any challenges on the election come to the court, Barrett has not answered the question of whether she might recuse herself.