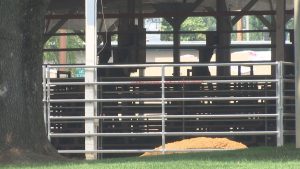 GRANTS PASS, Ore.– For the past several weeks the Josephine County Fairgrounds has acted as a staging ground and home for hundreds of evacuated animals from the fires. This week though, animals are having to be relocated to make room for preparation for the county fair happening next week, August 15 – 18.

According to Michael Weber, public health director for Josephine County, it’s good timing actually as many of the animals have already returned home due to lowering evacuation levels.

“We knew we only had a limited amount of time to use the space which was fine,” said Weber. “We expected to be mostly cleared up before we had to depart for preparation for the fair which is pretty much how it worked out.”

Most of the domestic animals that were being housed at the fairgrounds that haven’t been able to return home have already been moved to the Rogue Valley Humane Society by either their owners or from the help of Southern Oregon Emergency Aid.

With only a few animals left on Tuesday, the fairgrounds are pretty much set to begin construction of the fair. However, Weber says that if any new evacuations are announced during the fair, all animals will need to be brought to the Jackson County Fairgrounds instead.

Organizers say that after the fair they will assess whether to open the fairgrounds again to evacuees – if there is a need.