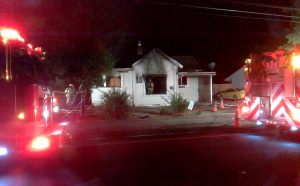 Grants Pass, Ore.- A Josephine County man is facing charges in connection with an arson that left two people with disfiguring burns.

Robert A. L. Lowden, 24, was arrested Thursday on several charges, including Arson and Assault. Investigators say he’s responsible for setting a fire on the night of Oct. 2, 2016. According to police, that fire was set just before midnight at a home on SW G Street.

When firefighters arrived at the house, it was engulfed in flames and a nearby tree had caught fire, threatening two other homes.

Police officers heard voices inside the burning home and forced open the home’s back door to get to the people stuck inside. Both victims, a 27-year-old woman and a 25-year-old man, were rescued, but both suffered severe burns. According to police, the victims have undergone dozens of surgeries since the fire.

In the course of their investigation, detectives identified Lowden as a person of interest in the case. He was found along the railroad tracks on the south side of the post office in Grants Pass.

Investigators have not revealed a possible motive in the case or whether Lowden is known to the victims. Anyone with information about the fire is asked to call Det. Ryan Brown at 541-450-6260.