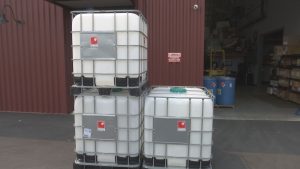 ASHLAND, Ore.– An Ashland company is taking it upon itself to try and get fresh water to the people of Hornbrook after seeing a recent story about how the community is still without drinking water.

Organic Alcohol says it is ready to send water as soon as it can connect with someone down there to drop it off to.

According to the company, it has several empty totes – previous used to carry high-proof alcohol – that are unused and ready to be filled up. Vice President Bobby Townsend said the containers are also sterilized due to the alcohol that was stored in them.

Each tote can carry 275 gallons and Townsend says the company wants to send three containers to Hornbrook – supplying 825 gallons total.

“Once we heard this story and we wanted to act on it and move on it,” said Townsend. “We heard theres schools and churches and organizations that have activities going and they don’t have fresh water. We just thought it’s pretty simple for us to put together logistics and get things done.”

The company is working with Plant Oregon in Talent, who is donating trucks to ship the containers, and Townsend says they’re ready to send the totes as soon as possible. Throughout the day, Organic Alcohol has been attempting to contact officials in Hornbrook to ensure the water gets dropped off correctly.

Townsend says they have everything prepared but need someone on the Hornbrook side with either a forklift or other means of offloading the containers for town.

Officials have told the company via email, the water people have right now is usable but it has to be boiled as has been the case for several weeks now. That’s not sitting well with people who live there who have spoken to NBC5 saying the water is stinky and they don’t feel comfortable drinking it.

Many say they are just going to the store and buying their own but that cost is certainly adding up.

In a phone call with Peter Kampa, general manager of the Hornbrook Community Services District, the Ford Family Foundation donated $24,000 on Tuesday to go towards purchasing equipment needed to make water drinkable in Hornbrook. A time of completion could not be confirmed.

Kampa also said he submitted Organic Alcohol’s offer to state regulators due to the used containers the company wants to deliver the water in. In a text, Kampas said the Department of Public Health “may or may not be” concerned by the used containers.

If the FDA and state standards are met, only then can the water be called potable.