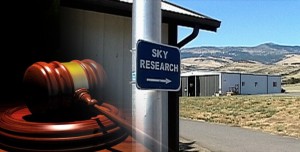 Portland, Ore. — The owner of Ashland-based Sky Research Inc. pleaded guilty in US District Court in Portland on Monday.

73-year-old Sky, the owner’s legal name, could face up to five years in prison after pleading guilty to showering a government official with various favors to receive nine Department of Defense contracts valued at $171 million.

According to the Oregonian, Sky will remain out of jail until his sentencing in October.