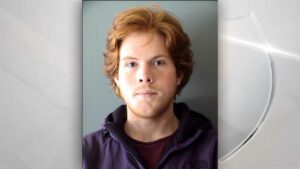 ASHLAND, Ore. – A man was arrested after he allegedly shot a firearm while on the roof of an Ashland home.

Police said at about 4:30 p.m. on Monday, May 3, 22-year-old Torrin Acker was on the roof of his house on Bridge Street when he fired a single shot into the air from a short-barreled shotgun.

According to the Ashland Police Department, the shotgun was previously reported as stolen.

Acker was taken into custody and charged with reckless endangering, resisting arrest, unlawful use of a weapon, first-degree theft and possession of a prohibited weapon.