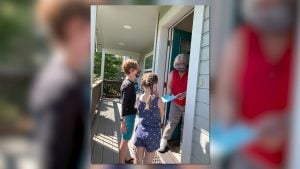 ASHLAND, Ore.– An Ashland neighborhood is getting news about its area from some incredibly local sources. Two young children have been releasing a newsletter every few weeks to highlight what’s been happening.

The newsletter is called Unicorn Neighborhood News and its inception is thanks to Elias, 8, and Adelaide Funk, 6.

The two siblings are being homeschooled at their self-named Unicorn College since the virus began. Their newsletter came about after they connected with neighbors through little concerts they put together.

So far, they’ve put out four issues with content spanning drawings, poems, movie reviews, and favorite pets. It even helped their neighborhood set up a small Fourth of July parade.

“I also do featured pets and on Issue 4 it’s Hudson,” said Adelaide, pointing to a picture of a dog.

About 30 newsletters are delivered to each issue. The family says they’ve received a lot of positive feedback.

“It really has brought our neighborhood together. A lot of people will ask the kids about it or they’ll give you suggestions on things they would like you to report on,” said Anne.

It’s become a nice bit of relief for everyone during these uncertain times. For the kids, it provides a chance to be creative while letting their neighbors enjoy a bit of fun. Issue 5 is set to come out soon and it doesn’t seem like they’re slowing down soon. As Adelaide says, they plan to put out 100,000 or so.

Elias and Adelaide plan on holding another social distance concert on Friday.