ASHLAND, Ore. – The investigation into the Almeda fire remains ongoing as Ashland Police reported it has yet to identify any suspects.

“It remains open and it will always remain open until we bring it to full resolution,” Chief Tighe O’Meara with the Ashland Police Department said. “I’m frustrated…We’ve engaged 18 outside law enforcement agencies from four different states to help with the investigation. We’ve interviewed hundreds of people.”

O’Meara says the fire has been determined to be human caused. However, investigators will not be able to know if it was deliberate or unintentional without more progress on the case. 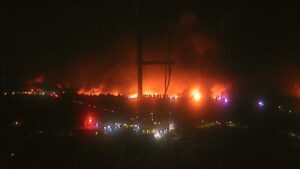 APD is working with the Jackson County Sheriff’s Office, Oregon State Police, Medford Police Department, – and consulted with the Federal Bureau of Investigation.

This past June, Ashland police released a photo of two possible witnesses, and asked for the public’s assistance. The two people are not being treated as suspects and are being sought for information into the case.

O’Meara says the investigation behind it remains its top priority, and reassures residents that it will continue to get closure.

“The Ashland Police Department is with you, you’re in our hearts,” O’Meara said. “We know how deeply traumatic this was in the community, for every person that lost a home or business. We are doing everything we can and we’ll continue to do everything we can to get a full resolution.”