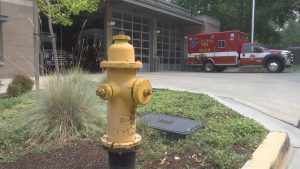 ASHLAND, Ore.– The first formal hearing of a proposed wildfire hazard zone expansion for the City of Ashland is taking place tonight.

Under the expansion, new construction or remodels would have to meet a strict set of rules for fire prevention. But current homeowners are worried about how this expansion could affect insurance.

While there are many different rating factors that affect how insurance companies determine rates and availability, one of the main factors according to Greg White, owner of Reinholdt and O’Harra Insurance in Ashland, is what’s called a Insurance Service Office (ISO) rating.

The ISO of the city recently dropped from a rating of four to three, dropping premiums for homeowners.

However, while rates may not skyrocket, insurance companies could still opt out of covering homes in the city.

“I don’t see that it’s going to be a huge rate increase,” said White. “What I see are carriers are going to choose not to participate. They just going to say, ‘You know, we’re just not going to write homes in Ashland, Oregon.'”

While some may opt out, White says it’s still too early to tell since, in order for the ordinance to pass, the city council would need to vote twice to approve it. White also said, if the ordinance passes, there are plenty of insurance companies who will cover Ashland regardless of the zone expansion and still provide competitive pricing.

The meeting takes place tonight at 7 p.m. at the Council Chambers at 1175 E. Main St.