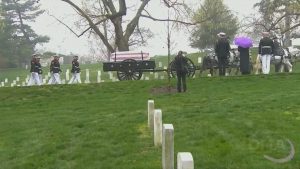 Glenn, who died in December at age 95, was laid to rest at Arlington National Cemetery.

President Trump has ordered flags at all federal sites to be flown at half-staff Thursday to honor Glenn.

The Marine fighter pilot was the first American to orbit the earth, doing so in 1962.

He later became the oldest human in space, serving on space shuttle discovery in 1998 at age 77.

Glenn also represented Ohio in the U.S. Senate for 24 years, and sought the Democratic presidential nomination in 1984.