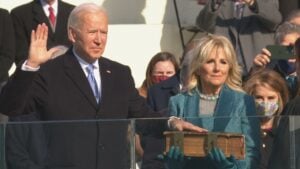 “This is our historic moment of crisis and challenge and unity is the path forward,” President Biden said after he was sworn in.

The rituals of the peaceful transfer of power took on a deeper meaning in the very spot where a violent mob tried to derail democracy just two weeks ago.

Facing a field of flags in place of the supporters who could not safely travel to Washington, President Biden vowed to beat back the COVID-19 pandemic and bridge the jagged political divide.

“We must end this uncivil war that pits red against blue,” he said.

At his side, Vice President Kamala Harris took her oath of office and smashing barriers of gender and race as the first African American, Asian American, and woman to become vice president.