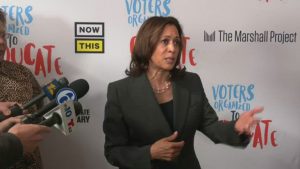 The announcement came Tuesday morning and concluded weeks of intense speculation. Before his selection, Biden made it clear he wanted to select a woman as his running mate and tasked a roster of experienced advisers to conduct an extensive vetting of possible choices.

Late last year, Harris ended her own bid to become president after reportedly running out of funds. The California senator said she wants to fight for the “American values of truth, decency, equality, freedom, and democracy.”

The day of the announcement, Harris said, “Black women and women of color have long been underappreciated in elected office and in November we have an opportunity to change that. Let’s get to work.”

Biden tweeted, “Back when Kamala was Attorney General, she worked closely with Beau. I watched as they took on the big banks, lifted up working people, and protected women and kids from abuse. I was proud then, and I’m proud now to have her as my partner in this campaign.”