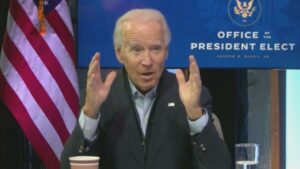 NBC News has learned some current and former Trump administration officials have privately reached out to the Biden transition team, signaling that they believe he will be the next president, but with President Trump still not conceding and official channels stonewalling, the president-elect says he needs access to real-time pandemic data and vaccine planning.

“I am optimistic, but we should be further along,” Mr. Biden said Wednesday while holding a virtual roundtable with front line healthcare workers.

President Trump, meanwhile, remains focused on swing state legal challenges.  His campaign is paying for a partial recount in Wisconsin.

One is already underway in Georgia, where three counties have discovered thousands of uncounted ballots, narrowing Biden’s lead to 12,000 votes.  Still, the overall results are not expected to change.