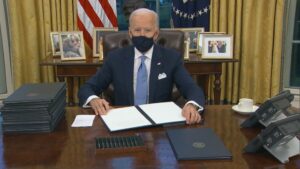 Pfizer admits its vaccine may be less potent against the South African strain.

“We are preparing for the possibility that there might need to be a change in the vaccine later,” Pfizer Chief Scientific Officer Philip Dormitzer says.

Meanwhile, the U.S. is set to officially rejoin the Paris Climate Accord, the worldwide agreement that former President Trump pulled out of on his first day in office.