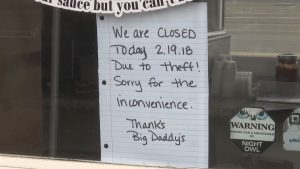 Medford, Ore.– A local barbecue restaurant was burglarized early this morning. The thieves making off with something unusual.

Big Daddy’s BBQ and Catering owner, Jerry Crutchifield, showed up to work this morning to find their smoker had been broken into.

With the chains guarding the smoker cut open, Crutchfield soon realized that all of the smoked meats they had prepared were gone, forcing them to close for the day.

The stand which has been at it’s location on Vilas Road for over two years has dealt with burglaries before but nothing like this.

“We try to help out,” said Darci Crutchfield, co-owner of Big Daddy’s. “If anybody ever came to us and needed food or wanted food we’d give it to them. For somebody to steal from us, it’s very frustrating.”

The owners say overall damage will cost them about $2,000 and while there were security cameras at the restaurant, it’s unclear at this point whether they will be able to help identify a suspect yet.

In a Facebook post, the restaurant notified customers that they would be closed and said it will be offering $500 as a reward for the identity of the burglar.