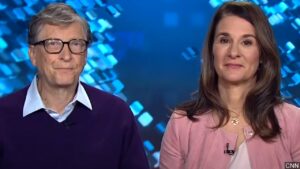 The couple announced on Twitter Monday they are ending their 27-year marriage.

The two met in 1987 when Bill Gates was the CEO of Microsoft, the company he co-founded.

At the time, Melinda was a project manager, eventually becoming the general manager of information products.

In 2000, six years after their Hawaiian wedding, the “Bill and Melinda Gates Foundation” debuted.

Since then they’ve spent over $53 billion on numerous initiatives focused on areas like global health, poverty alleviation and more.

As of December, the foundation has committed close to $2 billion to the global pandemic response.

The couple has three children.

In a statement, they wrote: “We continue to share a belief in that mission and will continue our work together at the foundation, but we no longer believe we can grow together as a couple in this next phase of our lives.”