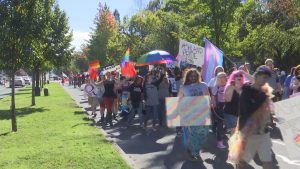 Ashland, Ore. — The seventh annual pride parade is taking place tomorrow. After a week of celebrations held by the Lotus Rising Project,  an organization that works with LGBTQ youth and their allies within the community, Southern Oregon Pride is holding the finale which revolves around a parade through Ashland. This year organizers are bringing everyone together in what is being called a “Blooming with Pride” parade.

Organizers say its especially important now more than ever with the political and cultural climate of the country.

“So pride and bloom is great because with everything happening, pride is still blooming,” said Gina DuQuenne, founder of SOPride and the grand marshal for this years parade. “That is so important, not only for our community but for our allies and everyone who is in Ashland.”

The parade is set to start at 11 a.m. Celebrations will continue after in Lithia Park and well into the evening at participating stores around downtown Ashland.