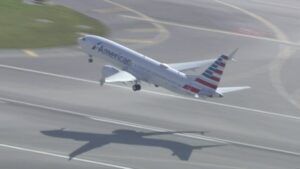 The American Airlines Flight 718 took off from Miami International Airport around 10:40 a.m. local time and is scheduled to land at Laguardia shortly after 1:00 p.m.

The Max was grounded in March 2019 after 346 people were killed in crashes of the aircraft.

A 20-month safety ban was lifted in November.

A Congressional investigation said the crashes “were the horrific culmination of a series of faulty technical assumptions by Boeing’s engineers, a lack of transparency on the part of Boeing’s management, and grossly insufficient oversight by the FAA.”

Ahead of Tuesday’s flight American Airlines President Robert Isom said they have complete confidence in the new aircraft but will allow passengers to opt-out if they want to.

“We try to be incredibly transparent about the aircraft that people are flying on,” Isom stated. “So whether it’s in your booking path or even at the gate making announcements. We’re giving people an opportunity to look at the flights, the seats that they’ll be on, and certainly the opportunity to make changes if they’d like to do so.”