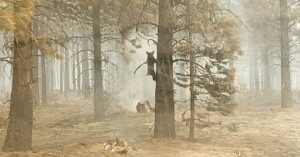 KLAMATH COUNTY, Ore. – It’s believed a bear cub found in a tree during the Bootleg Fire is back with its mother.

This past weekend, a firefighter on the southeastern flank of the fire was scouting for hazards when he saw a bear cub that ran several feet up the trunk of a nearby tree. When more firefighters arrived in the area, the bear climbed down the tree but remained in the area.

Eventually, crew members had to get back to work fighting the Bootleg Fire, but they left behind water in case the cub was thirsty as Forest Service and law enforcement personnel arrived to try and monitor the bear.

On Wednesday night, a wildlife biologist reported the cub’s mother was seen in the area and it’s believed they’ve been reunited.

“It is very good news that the animal is not an orphan,” Bootleg Fire managers said. “ODF&W stresses that many animals that appear alone often actually aren’t, so please don’t pick them up.”