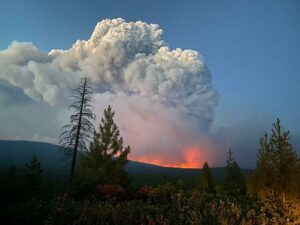 KLAMATH COUNTY, Ore. – A wildfire burning in the Fremont Winema National Forest has grown to about 3,000 acres in less than 24 hours.

The Bootleg Fire was first reported at about 1:45 p.m. on Tuesday, July 7 on Fuego Mountain approximately 11 miles northeast of Sprague River.

By about 5:00 p.m. Tuesday, the fire was estimated to be about 100 acres in size with no containment. On Wednesday morning, the fire grew to an estimated 3,000 acres

According to the Fremont-Winema National Forest, the fire is burning a mix of conifer and lodgepole pin in steep, rugged terrain.

Smoke from the fire is highly visible from Highway 140, Sprague River Highway, Chiloquin, and the surrounding area.

The fire is burning on National Forest System lands and there were no evacuations.