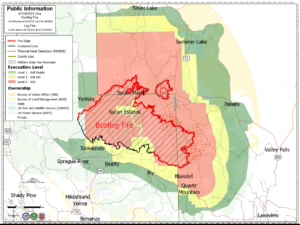 The Bootleg Fire started on Tuesday, July 6 about 15 miles northwest of Beatty, Oregon. Since then, it’s grown to 343,755 acres.

On Monday, fire managers confirmed the Bootleg Fire physically merged with the nearby Log Fire, which was last reported to be over 4,800 acres. An update on the total acreage covered by both fires is expected in a Tuesday morning update.

This past Sunday marked the ninth day in a row of extreme fire behavior that forced firefighters back to safety zones as the Bootleg Fire moved past retardant lines.

“We are running firefighting operations through the day and all through the night,” said Incident Commander Joe Hessel. “This fire is a real challenger, and we are looking at sustained battle for the foreseeable future.”

Evacuations are rapidly changing due to the nature of this wildfire. Visit http://tinyurl.com/bootlegevac for an interactive map of evacuation levels in Lake and Klamath Counties.

As of Monday morning, the Bootleg Fire was 25% contained.

For the latest information, visit https://www.facebook.com/BootlegFireInfo