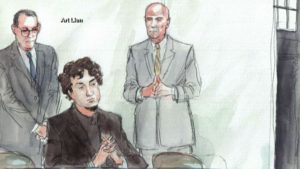 (NBC) – A federal court has overturned the death sentence of Dzhokhar Tsarnaev, the man convicted in the 2013 Boston Marathon bombing.

The three-judge appeals panel issued the decision Friday, more than six months after arguments were heard in the case.

Tsarnaev’s lawyers had argued that intense media coverage had made it impossible to have a fair trial in Boston.

Tsarnaev was convicted on 30 charges, including conspiracy and use of a weapon of mass destruction.

He’s been serving his sentence in a high-security supermax prison in Colorado.

Tsarnaev’s conviction remains unchanged, but a new sentencing hearing will need to be held.