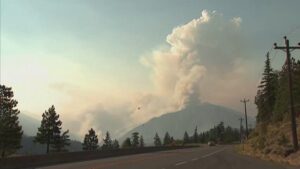 BRITISH COLUMBIA, Canada (NBC) – Over 100 fires are burning across central British Columbia as meteorologists warned of more lightning strikes over this past weekend that could further stoke forest fires fanned by high winds.

More than ten times the amount of lightning strikes have been hitting the area compared to the average for this time of year, starting many fires.

The fires were expected to burn through about 250,000 acres by the end of the weekend, officials said. It’s a significantly higher figure than by this point in previous years. British Columbia does not usually see its forest fire season ramp up until late July.

Over 1,300 homes were ordered evacuated as of Friday, July 2.

The Pacific Canadian province of British Columbia has been recovering from the grip of an unprecedented heatwave which has so far caused 719 confirmed deaths, and the province’s chief coroner said that is triple what would normally occur in the same time period.

During the heatwave, the village of Lytton broke Canada’s 80-plus-year-old heat record with a temperature of more than 121 degrees Fahrenheit.

A forest fire that started on Wednesday, June 30 razed Lytton to the ground and caused two deaths.

The cause of the fire was under investigation.