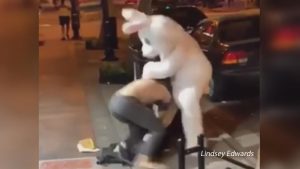 Orlando, Fla. — (WESH) An Orlando, Florida police officer had to step in and break up an Easter Sunday fight involving a person dressed as the Easter Bunny.

Video of the incident shows a person in a bunny costume throwing several punches before an officer steps in and breaks up the fight.

Antoine McDonald was the man in the bunny suit. He says he was out bar hopping with friends when he saw a man and woman fighting. He jumped in and tried to pull the man off the woman.

Lindsey Edwards, who provided cellphone video of the fight, said that just before the bunny jumped in he saw the man spit on the woman he was fighting with.