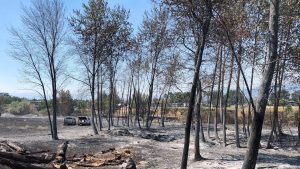 Update (07/20/18 4:03 p.m.) – Investigators have identified a man whose body was found within the area burned in Tuesday’s Penninger Fire in Central Point.

The Jackson County Sheriff’s Office said 60-year-old Robert Lee Walker died as a result of “thermal injuries sustained during the fire on July 17, 2018.”

According to deputies, Walker was a transient living along the Bear Creek Greenway. His family has been told about the death.

Original story: CENTRAL POINT, Ore. – A body was found within the area burned in a fire off Peninger Road in Central Point.

Detectives are still investigating the cause of the fire, but they do know it started near a transient camp at the Bear Creek Greenway and they believe it was human-caused.

The Jackson County Sheriff’s Office said during an aerial survey of the burned area conducted on Thursday, crews spotted a body within the perimeter. Investigators responded to the scene and cordoned off the area.

The burned body was found to be that of man, deputies said. They’re still trying to determine if the man died before or during the fire.

An autopsy will be conducted to determine the cause of death. The identity of the man is not yet known.

JCSO released no further details. Anyone with further information is asked to call 541-774-8333.