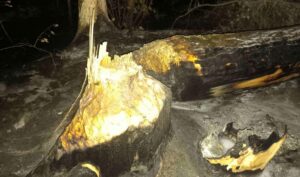 MULTNOMAH FALLS, Ore. – A beaver is being blamed for starting a fire in the Columbia River Gorge.

On Thursday night, a brush fire started at Multnomah Falls.

The fire was brought under control in about two hours.

The Corbett Fire District determined the fire was caused by a beaver trying to fall a tree. With east wind blowing, the tree fell on a power line, sparking the brush fire.